Was this article useful?
Click the thumbs up >
Here’s the proof that Mazda’s hot 6 MPS model isn’t a one-off – the 3 is also getting the Mazda Performance Series treatment.

Move over Astra VXR: the 3 MPS should become the most powerful fourpot hatch on the market. Squeezed into the 3’s nose is the 2.3-litre engine from its MPS big brother. Thanks to its turbocharger, the engine produces 250bhp.

Engineering sources hint that peak power will remain untouched, so the hot hatch could potentially despatch the 0-62mph sprint in close to 6.0sec, and pass 150mph flat out.

Unlike the 6 MPS, however, Mazda has pulled back from a four-wheel drivetrain. Consequently, the 6’s 280lb ft of torque should be reduced to avoid torque steer and wheel spins of Saab 9-3 Viggen proportions.

Power will be transmitted to the front wheels via a slick, six-speed manual gearbox.

The chassis gets the traditional hot hatch upgrade, with beefed up brakes, stiffer springs and dampers, and a lowered body. Expect a similar makeover inside, with drilled alloy pedals, bucket seats and sporty dials.

The mule spied testing at the Nürburgring is a stealth bomber, with only a bigger rear wing and mocked up bonnet scoop, Impreza WRX-style, betraying its performance potential.

The finished model should get split twin sports exhausts, 18in wheels and a chunky bodykit to mark it out from the rest of the range. 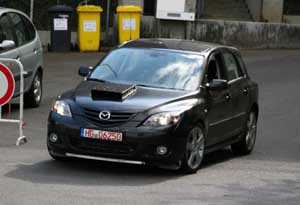 3 MPS runs a 2.3-litre turbo, sending an impressive 250bhp and around 240lb ft of torque to the front wheels.

Stiffer springs and tauter damping for a sportier ride, and bigger brakes to rein in the turbo engine.