Was this article useful?
Click the thumbs up >
This is the all-new Freelander MkII, betrayed by its rear end. The door is no longer hinged at the side, making the boot easily accessible from both sides.

The rear wiper scuppers drop down glass – a blessing considering early MkIs had a habit of lowering the screen of their own accord. The soft-top three door is axed, due to insufficient sales.

And the spare wheel now lurks in the boot: despite development work, run-flats aren’t quite ready for off-roaders.

Relocating the spare wheel is a neat way of keeping the new Freelander’s length close to the original’s. The width of the spare is instead injected into the vehicle package, and a wider track also boosts shoulder room in the back.

The MkII has an all-new platform, sharing components with Ford’s new big cars, such as the SAV crossover-MPV and the next Mondeo. The engines are mounted tranversely, with Land Rover picking powerplants from across the Blue Oval empire. It would have ditched the K-series, regardless of whether MG Rover had survived or not.

Expect the latest generation of Ford/PAG diesels, new petrol engines shared with Volvo, and a V6 petrol. A six-pot diesel is not currently part of the plan, but hasn’t been ruled out.

Power is sent to all four wheels by six-speed manual and automatic transmissions. The new Freelander is blessed with a simplified version of the Discovery’s Terrain Response. Toggle the switch between grass, ice and on-road settings, for example, to prime the anti-lock brakes, engine outputs and stability programme to best suit the conditions. Insiders vow the new Freelander will be best-in-class off-road.

This chassis is clothed in new sheet metal. Sources say the look has hints of new Disco, and details like the vents and door handles are similar. The headlamp cluster continues the bisecting circle theme introduced by the Range Rover.

Battle will be joined with Toyota’s all-new Rav4 in late 2006, when the Freelander finally hits showrooms. 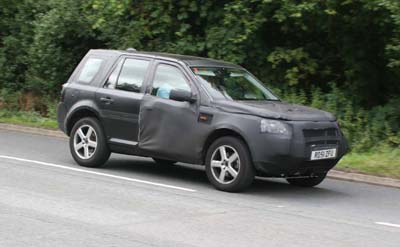 Discovery 3 has influenced the bodywork; nose is in keeping with rest of the Land Rover family.