Was this article useful?
Click the thumbs up >
Land Rover is claiming a world first with its 2007 Range Rover TDV8. The 4x4, which goes on sale this week, will feature a petrol fuel guard system.

Land Rover's new system is incorporated into the vehicle's diesel filler head and automatically activates the intervention of a mechanical shutter if a petrol nozzle is inserted, preventing petrol being dispensed into the diesel tank.

The system distinguishes between petrol and diesel nozzles because thinner unleaded petrol dispensers go deeper down the neck of the vehicle's fuel tank, activating the shutter.

Chief programme engineer for the 2007 model year Range Rover, Paul Walker, says: "The new TDV8 engine in the Range Rover is so powerful and refined we feel that there is a danger, more so with this vehicle than with any we have sold in the past, of the driver mistaking the vehicle for a petrol-powered derivative – especially if the driver isn't the vehicle's regular user."

According to the AA, there was more than 100,000 cases of misfuelling (274 each day) in 2005, with diesel vehicles being filled with petrol in error.

The Range Rover for 2007 comes with a number of other enhancements in the TDV8 diesel and V8 petrol models, including the all-new V8 diesel engine, revised cabin design and new technologies including Terrain Response and the fuel protection system as standard. 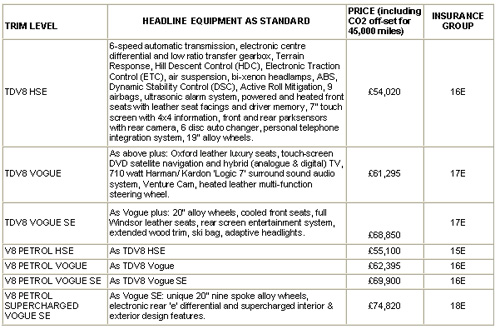