Was this article useful?
Click the thumbs up >
Roadworthy Suzuki in Bristol has become the first Suzuki franchise in the UK to employ two technicians who are fully qualified as masters of the brand.

Daniel Nicholls and Paul Adie, two of four Suzuki masters in the country, started work on gaining the qualification in 2004 when Roadworthy acquired the Suzuki franchise.

“It takes around two years to complete the course,” explains Chris Hoare, aftersales director at the dealership. “We’ve always been very keen on training and when we received the franchise we realized we needed to develop our brand awareness and skills.

“The courses cover everything from brand awareness to diagnostics.”

Hoare says that overall productivity at the dealership has increased as a result. “It’s also given us the confidence to enter next year’s AM Awards,” he says.

To gain the masters qualification, Nicholls and Adie completed 18 courses.

“It’s definitely helped increase my general knowledge of Suzuki’s resources, such as their diagnostics equipment and other guidelines,” says Nicholls. 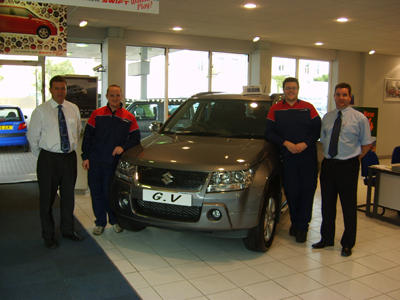