Was this article useful?
Click the thumbs up >
Here’s Renault’s answer to the Peugeot 107 – the all-new Twingo. It’s telling that these spyshots are the first, delayed sighting of the new city car.

The launch was pushed back from this year to 2007, because the new management team under Carlos Ghosn didn’t like the way the second-generation car was shaping up.

“We scrapped part of the design and a lot of the details, because we felt they didn’t fit,” Renault product boss Patrick Pelata told AM. “The first customer clinic was terrible, so we stopped it to find the right solution.”

Pelata was closely involved in developing the Twingo MkI, long before his recent sabbatical at Nissan. He has been highly critical of Renault’s designers and the product planners who succeeded him, condemning them for losing customer focus and allowing polarizing designs.

Now Renault is working flat out to get the Twingo II, codenamed X44, back on track. One element that got the boot was a Mégane-style rear end. But the general package follows the MkI blueprint: three doors and a tall roof, allowing decent space for four despite its sub-Clio size.

The Twingo II is based on a cut-down version of the last-generation Clio platform. That means that the car will be available in right-hand drive this time. Today’s regulations mean that anti-lock brakes are now mandatory; ESP and up to six airbags protect occupants.

The engine line up is typical for a baby car: 1.0- and 1.2-litre petrol engines. While Pelata deemed a diesel surplus to city car requirements last time, Renault’s smallest, 68bhp 1.5-litre dCi gets an airing for the MkII.

Middle-class women loved the original Twingo, but it remains to be seen whether they will go for the MkII. Much depends on the work of Pelata and his trouble-shooting team. 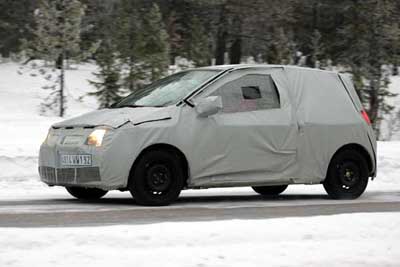 Design has been the subject of internal wrangles, with a Méganesque big butt kicked into touch