Was this article useful?
Click the thumbs up >
Citroen UK has received an endorsement for its contribution to apprenticeship training from the Learning and Skills Council (LSC), the body responsible for funding training for over 16-year-olds in England.

The certificate acknowledges Citroen's commitment to apprenticeships as a key part of their workforce development strategy. Citroen UK's 273-strong authorised repairer network employs over 200 advanced apprentices and is expected to recruit a further 100 apprentices by the end of this year.

Speaking at the ceremony, David Way said: "It is heartening and extremely pleasing to see an employer with such a positive attitude to apprenticeships and training. This strong collaboration arrangement, with an expert training provider such as ReMIT, demonstrates their real ambition to deliver excellence."

Citroen UK manages its apprenticeship programme in conjunction with ReMIT, the training arm of the Retail Motor Industry Federation (RMIF). The two companies entered into an exclusive partnership arrangement in March. The majority of young people employed on this programme, aged between 16-21 years of age, will train as light vehicle technicians. Apprentices will earn as they learn and achieve NVQ level three. 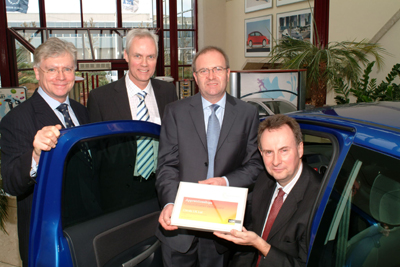