Was this article useful?
Click the thumbs up >
BMW is gearing up for a big expansion of the 1-series family, after two years on the market.

A three-door hatch and the rag-top convertible pictured here are bound for showrooms next year; new engines and other bodystyles are also on the drawing board, including a high-performance M model.

First up in spring 2007 is the three-door hatch. Priced around £15,000, the entry-level BMW will make the blue and white propeller even more accessible to punters – and launch the 1-series in the US.

The convertible follows in time for summer ‘07. The 3-series cabrio may be switching to a folding tin-top, but the baby BMW is sticking with a fabric roof. That will keep the centre of gravity lower, and help maximise boot space in what’s already a cramped car.

There remain four seats fitted with pop up rollover protection, although in reality the 1-series is a 2+2. That new saloon boot is said to stow around 250 litres of luggage, with the roof down.

Although this prototype is disguised, BMW gave an uncensored glimpse of the cabrio’s sheet metal back in 2002, when it unveiled the CS1 show car.

With its rear-wheel drive underpinnings, unique in the class, the £22k cabrio will command a premium over rivals from Ford, Vauxhall and Volkswagen. The five-door’s familiar engine line up will be carried over, although new petrol engines are on the way.

The new twin turbocharged 3.0-litre, kicking out 306bhp, is being lined up. And the Munich grapevine suggests a new 2.0-litre four will arrive in time. With direct injection, it kicks out 190bhp; with a turbo it makes 230bhp.

Another variant is a two-door coupe, expected in 2008. This bodystyle would most probably launch the M version. It gets a butch bodykit, 18in wheels, quad tailpipes and a rear boot spoiler. Expect the new M roadster’s 338bhp 3.2-litre straight six in the nose, a 0-62mph time close to 5.0sec and a likely starting price around £30,000. 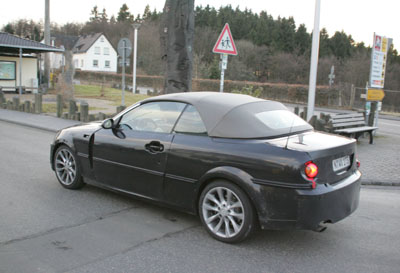 Package
Four seats although the rear perches are cramped, and 250 litres of boot space even with the fabric roof stowed

Engines
New engines for cabrio may include 2.0-litre petrol with 190 or 230bhp; 3.0-litre turbo and diesel six may appear