Was this article useful?
Click the thumbs up >
Indian car brand Mahindra is returning to the UK after a decade away and is in talks to find a distributor.

“We are looking to create a dealer network, but we won’t be in multi-franchised showrooms,” he says.

“Whoever becomes our distributor will have to open Mahindra sites. We have minimum standards, and each must to be able to display three cars comfortably. We want people to be able to walk around the cars because we are creating an image for the company but also for India.”

Mahindra’s first offering will be the Goa, a seven- or eight-seat SUV with a 2.6-litre 115bhp common-rail turbodiesel engine. It’s already on sale in Italy, France and Spain, and is due in the UK mid-2007. In GLX trim the big 4x4 gets central locking, air-con, power windows, two airbags and optional leather trim.

Next to arrive will be a workhorse pick-up – the Pik-Up – which will feature the same diesel engine.

Mahindra was founded in Mumbai in 1945 and is still based there today. Its last UK car was the Classic, a Jeep Wrangler copy built under licence from Chrysler. Distributed by Motor Industry Group, it sold in tiny numbers and was axed in 1996. In 2002, Mahindra launched new vehicles designed in-house, and last year topped 150,000 sales globally. All but a fraction were in India.

Goenka believes the Goa will sell to farmers and the rural community in the UK.

He recognizes Mahindra will have an image problem to overcome. “We have found that once people get to know our product, the negativity doesn’t last too long,” he says. 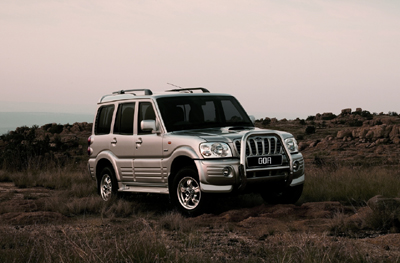