Was this article useful?
Click the thumbs up >
A standard Isuzu Rodeo pickup has set a new fuel economy record by achieving 52.01 mpg after being driven virtually non-stop from Land’s End to John O’Groat’s.

The four-door five-seat Rodeo Denver Max covered the entire 853-mile trip on a single tank of fuel, using 16.4 gallons to achieve the record.

It is the first time a diesel-engined one-tonne pickup has completed the challenge and the entire exercise took 22 hours from start to finish.

Roberts said: "We practiced a little beforehand to discover the most economical engine speed band which we established at around 1,600 rpm. That means about 38 mph but we allowed ourselves up to 60 mph on downhill stretches. The only extra was a cover for the load-bed which reduces drag; otherwise the Rodeo was straight out of the box."

He added: "We made sure we had a good meal prior to setting off and deliberately started at 8pm to avoid heavy traffic, finally arriving at John O’Groat’s 22 hours later after one meal stop and the inevitable toilet breaks.

"I first had the idea of an economy drive earlier this year as customers began telling me how economical the Rodeo was in day-to-day driving. We would definitely do it again but think this figure will take some beating from rival pickup manufacturers." 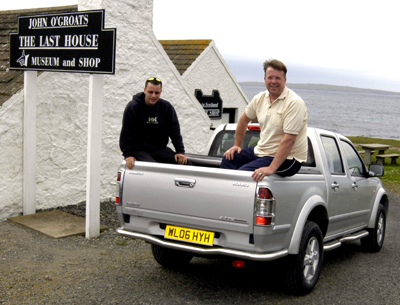