Was this article useful?
Click the thumbs up >
Chevrolet has collaborated with Paula Pryke, the celebrity florist, to create the UK’s first ever car completely covered in real flowers.

Pryke, florist to stars such as Sienna Miller and Kate Winslet, has created the limited edition Matiz to appeal to a female audience.

She used thousands of yellow Gerberas to create the special edition. The car will be officially unveiled at the British International Motor Show on July 21.

"When it comes to buying a car, women will often pick a car that is not just practical, but also makes a personal statement about them. I’m really excited to be working with Chevrolet using a car as my canvas to create a design that expresses my personality.

"Hopefully the resulting ‘Car in Bloom’ will also appeal to women up and down the country and bring a much needed touch of femininity to a traditionally masculine subject," said Pryke.

The 'Car in Bloom' is purely for display purposes only and will not go on sale in the UK. However, Pryke will now be using a ‘Car in Bloom’ for her floral deliveries. 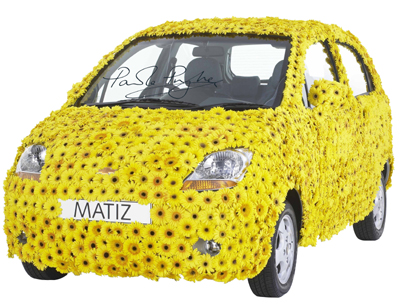