Orders roll in for new Jaguar

Was this article useful?
Click the thumbs up >
Jaguar has already had 3,000 pre orders for its new XF model.

Richard Parry-Jones, chief technical officer of Jaguar’s parent company, Ford, said: “The fact that there is a buzz being generated around the XF is good and the translation of that into pre-orders has exceeded expectations.

“If it sells as expected, and all the early indications say that it will, it will be profitable for Jaguar and a very important stepping stone in the road for recovery for profitability.”

Parry-Jones said of even those not immediately bowled over by the car’s design would warm to it the more they are exposed to it.

“It’s a grower, there are intriguing features to the design which you can’t really work out when you first see it. It’s not a completely, conventionally pretty car. There are a lot of design elements that are not predictable and those unpredictable elements take a little longer to understand,” he said.

UK customers will start taking delivery of the XF in March next year. Built at Castle Bromwich it will be exported to 66 countries.

Parry-Jones added: "It’s a much more interesting proposition as a design statement so I wouldn’t be surprised to attract more design aware people from the German brands. The other obvious source of sales is people who are trading up from smaller premium vehicles and looking for a bigger vehicle and making more of a significant prestige statement." 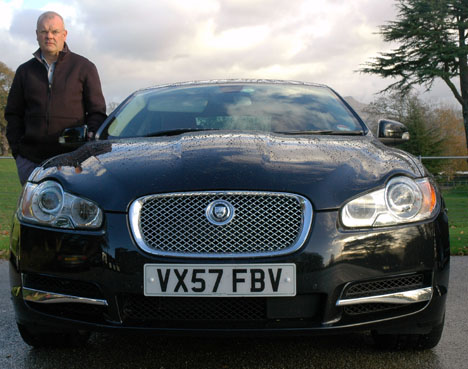 Richard Parry with the new XF.