Was this article useful?
Click the thumbs up >
Part exchange values averaged £3,036 for the fourth quarter of 2006, according to BCA’s latest report.

It was the first quarterly increase since the spring 2006, and only the second time on record that the £3,000 barrier had been broken. The rise of £246 over Q3 was equivalent to an 8.8% increase.

Both mileage and age decreased slightly against Q3 when part exchange product reaching the market had the highest combination of age and mileage since early 2004.

BCA said this supports the view that many younger, lower mileage part exchange vehicles were being retailed, rather than traded, mainly due to the overall shortage of stock in the marketplace in the back end of 2006. 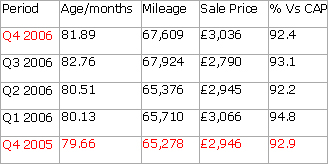