Was this article useful?
1 person found this useful
The Motorline Group has opened its new Renault dealership in Maidstone today.

The car showroom on Hart Street is run by general sales manager Mark Batt, who has been promoted from his position as used car sales manager for Motorline’s sister Renault sites in Canterbury and Ashford.

The nine-car showroom – formerly a Mercedes dealership owned by Dutton Forshaw – has been refurbished inside and out to bring it up to Renault’s latest corporate standards. It is Motability accredited and will employ around 10 people, four of whom have already been appointed, and recruitment is still underway.

The launch of the new site coincides with the opening of Motorline’s 10 bay Renault Service Centre in Aylesford just outside Maidstone.

Motorline acquired the Renault Service workshop on Quarry Wood Industrial Estate in Aylesford earlier this year. Now, the service centre is up and running under the Motorline banner after a refurbishment and the installation of new diagnostic equipment. It’s manned by Renault technicians, parts assistants and service reception staff, and headed by service manager Adam Dunger and parts manager Steve Hall.

All 14 members of service staff have been retained from the Quarry Wood Service Centre, which was previously owned by Whitehouse Group.

Gary Obee, Motorline’s franchise director, said: “Maidstone has been without a main Renault dealer for six or seven years now, and Motorline saw this as an ideal opportunity to fill the gap.”

Obee excepts his the Truro site to sell 650 units this year and make an expected annual turnover of £12 million. 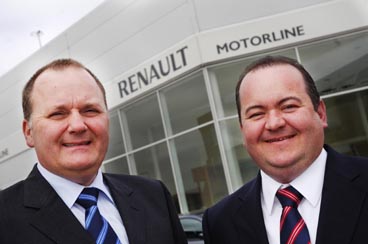 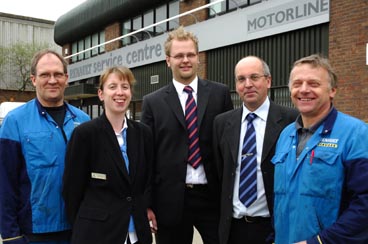