London labour rates the most expensive

Was this article useful?
Click the thumbs up >
A survey of labour rates at franchised and independent workshops have revealed a north-south divide in prices.

The Warranty Direct Labour Rates Survey 2007 reveals Greater London is the most expensive region in the country with an average labour rate of £89.78 per hour when combining both franchised and independent garages.

The capital was also home to the most expensive dealer in the country charging £183.30 an hour.

The cheapest part of the country was Fife with garages charging £55.40 on average. Besides Cornwall (£62.68), Lancashire at £61.67 an hour was the most southerly region in the 10 least expensive areas.

There remains a significant difference between choosing a franchised dealership over an independent garage at £89.31 and £49.92 an hour nationwide, respectively. 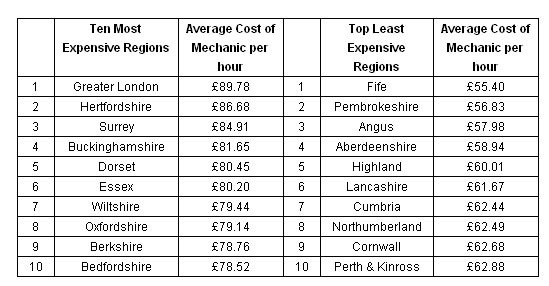 The data is based on labour rates from more than 3,856 franchised and independent garages across the UK.

A website is available is allowing comparisons of workshop charges: www.labourrates.co.uk.