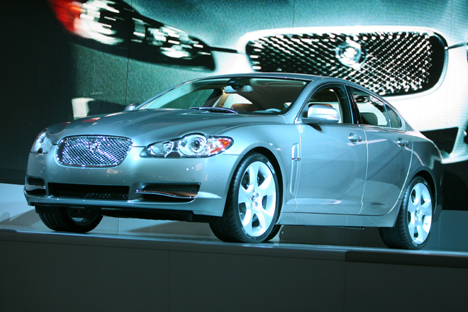 Amidst all the hoopla surrounding the new Jaguar XF, it’s easy to forget just how significant this S-Type replacement is for the Coventry firm.

Ford has a coterie of suitors lined up to buy its loss-making premium carmaker, and we’re expecting the new owner to be announced within weeks. It’s quite a baptism of fire for the XF.

The top brass at Jaguar are only too aware of the XF’s import. When the covers slide off the car at the Frankfurt Messe on September 11, the suits will be watching with an eagle eye to judge the reaction to its radical new design. If the ultra-modern XF successfully stretches the clubby appeal of Jaguar to a new, younger audience, it will have succeeded. If it’s judged to be too derivative – a Mondeo in posh look-at-me clothes – it could hamper the corporate sale.

Isn’t it hard to design a crunch new car like the S-type successor with the world watching and a sale looming? “There’s a huge frustration,” admits design boss Ian Callum with a sigh. “I designed the XF to create a great Jaguar. There is no compromise on this car as a result of outside influences. I put myself into a state of discipline and focus and put that stuff to one side.

“There were times when people said ‘this car has to be a success, or else’, but I’ve never taken any notice of that,” he adds. “It will be successful, there’s no doubt about that.

“There’s a whole bunch of people out there craving for anything other than the obvious.”

Most commentators agree that if the XF gets a warm reception, it may raise the price that Ford can demand for Jaguar. Get it wrong, and it could slash the asking price – or even scupper the sale altogether.

Judging from the hundreds of reader comments at carmagazine.co.uk, the XF is quite a Marmite design. You’ll either love it, or hate it. But the XF is just the distinctive car Jaguar needs right now.