There are all sorts of ways of measuring the health of a car company. One of the simplest is capacity utilisation – how close is the factory to its maximum output?

Car manufacturing has huge fixed costs in terms of product development, tooling and distribution, while the actual cost of making a car is pretty low – normally not more than one-third of the selling price.

So, if a factory is running at 50%-60% of capacity in Europe, it is almost certainly losing money.

Conversely, a factory running at more than 90% of capacity should be making decent money unless it is very inefficient.

In the early 1990s, VW’s giant Wolfsburg factory was reckoned to have a break-even point of 102%, which is why VW has been on a cost-cutting mission ever since. 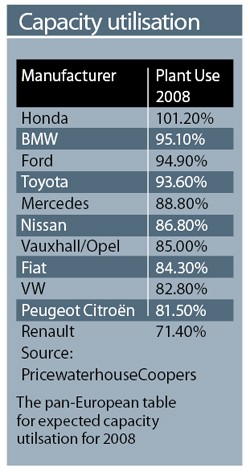 However, that is the exception – after all, if you can’t make money when you are working flat out, what is the point of being in business?

Now Pricewaterhouse-Coopers has published its pan-European table of expected capacity utilisation for 2008 (provided the current crisis does not bring production to a juddering halt in the final couple of months).

Interestingly, it mirrors UK sales performance quite well – those brands we think of as doing well are indeed running their factories at a fair old clip.

Honda has the highest utilisation of all at a remarkable 101%. In second place is BMW with 95%.

Just behind is UK market leader Ford on 94.9% and with the busiest single factory of all – 116.3% for its Ghent plant which
makes the Mondeo, Galaxy and S-Max.

At the wrong end of the table is Renault – evidently the rest of Europe is as underwhelmed by the current products as we are.

The Modus factory in Spain is running at 49.1% of capacity and the Laguna factory is at 56.1%. Indeed, without the eastern European factories churning out Logans, the overall figure would be catastrophic – only one western factory is above 60% utilisation.

Peugeot-Citroën is second from bottom with a figure of 81.5%. Its big problems is the Rennes upper-medium/executive car plant and the Poissy small car plant that got lumbered with the unwanted 1007.

Given the current economic circumstances, utilisation figures are likely to go down over the next year. If you are currently at 95% capacity, that is a problem – but if you are at only 80% now, that looks more like a crisis.