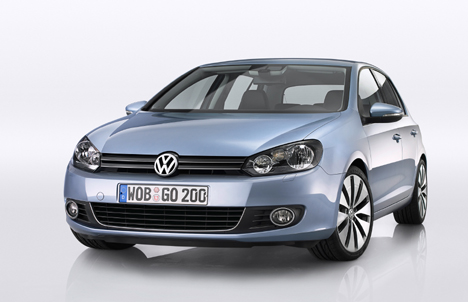 Volkswagen has revealed the first pictures of the sixth generation of its Golf which goes on sale in January.

The tweaked design for the new Golf takes its cues from VW’s new Scirocco.

Walter de Silva, Volkswagen Group’s head of design, said: “It is more accentuated than its predecessor with precisely defined lines and edges and with finely proportioned flared surfaces and recesses.”

Other diesel variants are available with 88bhp, 138bhp and 168bhp outputs linked to a choice of six-speed manual or DSG gearboxes. The new petrol engines will have outputs of 78bhp, 100bhp, 120bhp and 158bhp.

Volkswagen’s adaptive chassis control (ACC) will be offered on the Golf for the first time.

ACC is available on the Passat CC and standard on the new Scirocco, and allows the driver to select from normal, comfort or sport modes to adjust suspension, steering and accelerator response.

Prices and specifications for the new Golf will be announced closer to the vehicle’s UK launch in January.