Normality in market is likely to be maintained

Following the remarkable surge in demand for trade stock and its impact on used car values, the market is now showing signs of settling into something closer to a ‘normal’ pattern.

Once again the burning question is what will happen in the used car market over the next few months.

In the context of the aftermath of an unforeseen and unprecedented downturn, followed by an equally unforeseen surge, the truth is that such market volatility makes ongoing conditions difficult to call.

CAP’s view is that something like normality will now be maintained.
This means a switch from universally rising values to the more typical mix of relatively minor gains and losses.

This is reflected in Black Book for May, which sees a return to small reductions mixed with stable or slightly rising values.

Dealers are expressing cautious optimism for their business prospects in the immediate future.

According to comprehensive research among nearly 200 franchised and non-franchised dealers, the majority are describing business as ‘stable’ at the moment.

Even better news is that a larger majority expect current trading conditions to be maintained or even improve in the short term.
This is no doubt in part due to the ongoing difficulty in sourcing sufficient stock.

Despite the fact that most dealers are now reporting a slight reduction in sales, enquiries and showroom footfall, the shortage of stock at least gives confidence that the market is still not over-supplied.

It is now expected that some increase in volume will appear soon.

Last year saw around 15% of leasing contracts extended as operators sought to avoid the worst market in memory.

Now that has come to an end, so more cars will become available.

Looking ahead, it seems the big surprises are at least over for now.

The recession continues to deepen, however, and the issue of unemployment cannot be underestimated.

The implications of the scrappage scheme are still being hotly debated around the industry.

CAP acknowledges that some extra demand will be stimulated in the new market but, because it will be focused on smaller, cheaper cars or brands - and will not generate part-exchanges - it seems unlikely that it will make a major difference across the market. 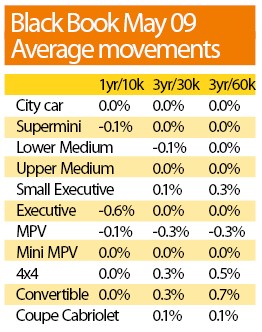