Aston Martin has developed what it calls a “luxury commuter concept” in a massive side step from its normal stable of luxury sportscars. 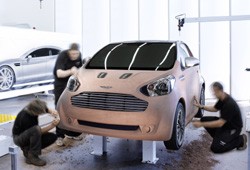 The new Cygnet model has been developed with Toyota which is lending its iQ as the basis for the platform which Aston Martin believes will pull in customers looking for a luxury runaround.

The new models signifies further diversification for Aston Martin which is also reviving its Lagonda brand to allow it to attack larger segments of the global market.

AM sister title CAR has gleamed some more details on the new Cygnet, which is likley to cost in the region of £20,000.

Dr Ulrich Bez, Aston Martin chief executive, said: “Now is the right time for Aston Martin to take this first bold step to embark on this special project – made possible with the support of an organisation of Toyota’s stature and capability and the intelligent design and perfect city car package of the iQ.

“Much work is still required, but I am confident that this project could become reality in the not too distant future. This concept – akin to an exclusive tender to a luxury yacht – will allow us to apply Aston Martin design language, craftsmanship and brand values to a completely new segment of the market.”

Dr Bez suggested that a Cygnet could be offered when customers buy a DBS, DB9 of Vantage.