Kia has revealed new pictures and details for its facelifted Cee’d and the new Sorento.

The facelifted Cee’d will go on sale in the UK on October 1 and will feature a new eco-dynamics model with carbon dioxide emissions that have been reduced to 110g/km, as well as what Kia calls “intelligent stop and go” technology.

The refreshed Cee’d has been restyled under the direction of Kia chief design officer, Peter Schreyer.

The new Sorento is longer and lower than the current model and incorporates Kia’s new design DNA into its looks.

The most popular engine choice in Europe is expected to be the new 2.2-litre diesel unit from Kia’s ‘R’ family of engines.

The new engine produces 195bhp and will be offered with either a six-speed manual or Kia’s new six-speed automatic transmission. 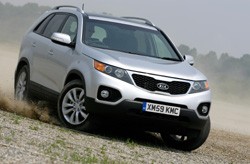 The line-up, final specification and prices of the new Sorento will be announced closer to the car’s UK on-sale date of February 1, 2010.