Scrappage scheme orders have reached 154,927 which has breached the halfway mark for the Government’s £300 million allowance to fund half of the scheme.

Orders could be fuelled further by the September plate change, which could mean the scrappage scheme funds could run out well before the end of the year. Manufacturers have to match the Government’s contribution of £1,000 for each vehicle and many have already expressed concern that the scheme would run out.

Jeremy Thomson, managing director for Mazda UK, said it would be “irrational” not to extend the scrappage scheme. Ford also wants the scheme to be extended.

The Government has revealed regional breakdowns for the scrappage scheme figures for the first time today and the south east has the highest take-up with 18% of the total. 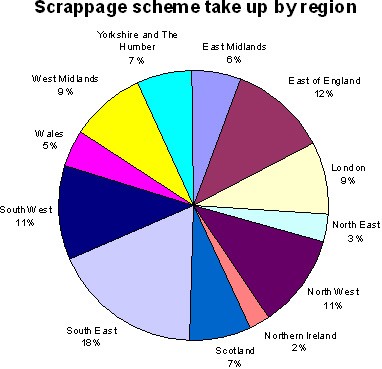 Lord Mandelson, secretary of state for business, said: "I'm pleased that we have already achieved over 150,000 new car orders. This is a great deal for manufacturers and dealers, not to mention the customers.

“The scheme has contributed to the 13.5% jump in car manufacturing and the first growth in new car registrations since April 2008.”

According to the Government data released today, new cars that have been bought under the scrappage scheme have 25% lower carbon dioxide (CO2) emissions on average than the cars that are being scrapped.

The average CO2 figure for scrapped cars is estimated to be at least 179 g/km, compared to a much lower 133.9 g/km emissions average for cars bought through the scheme.