Vauxhall has revealed pictures of its new Meriva featuring rear-hinged back doors to allow greater space for occupants to enter and leave the car. 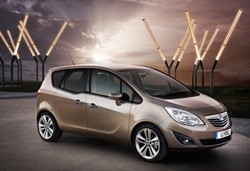 The new car will get its official debut at the Geneva Motor Show on March 5 and Vauxhall believes its new FlexDoor system will be a hit with families.

Vauxhall said that due to the larger door opening and free space around the B-pillar, parents can lift small children forwards in to rear-mounted, second-stage child seats without having to contort themselves around a door.

The doors can only be opened when the car is stationary and an automatic lock engages as soon as the car pulls away, eliminating the reason the style was dubbed “suicide doors” in the 1930s. 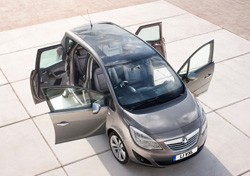 While the concept of two rear-hinged back doors is not new in the motor industry, the Meriva’s FlexDoor system is the first time it has been used on a family car in recent years.

But unlike other rear-hinged door applications (Rolls Royce Phantom/Ghost and Mazda RX8), the Meriva benefits from front and rear doors that open independently, and does not require rear passengers to sit behind the door opening.

Vauxhall is introducing FlexRail on the new Meriva which allows drivers to move the centre console and is also adding FlexSpace which allows customers to fold down the rear seats flat.

The new Meriva will come with a choice of six turbocharged engines with power outputs from 73bhp to 138bhp. Vauxhall has confirmed there will be a high mpg/low CO2 ecoFLEX model available in the UK.

More information will be available closer to the Meriva’s debut at Geneva Motor Show on March 5.