Volkswagen’s new Touareg will go on sale in the UK in August and is 20% more fuel efficient than the model it replaces following a reduction of 200kg to the overall bodyweight of the vehicle. 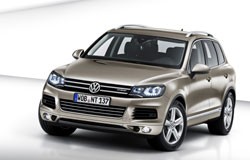 Prices will be revealed closer to launch later this year.

The new model will be powered by a range of V6 and V8 engines, as well as a petrol-electric hybrid option for the first time. The new Touareg will also feature an eight-speed transmission on the majority of models as well as start/stop technology, touchscreen navigation and leather upholstery.

A choice of new options will also be available for dealers to upsell, including high beam assist that automatically dips the headlights when it senses oncoming traffic, side assist to warn of vehicles occupying blind spots, adaptive roll compensation air suspension and air conditioned, massaging seats.

The electric motor is linked to a disengagement clutch to allow it to operate independently of the combustion engine making the new Touareg a full hybrid when necessary. On electric power only, the Touareg can travel up to 30mph for city driving.

The electric motor can also supplement the V6 engine to provide a useful boost during overtaking manoeuvres and allows the Touareg Hybrid to accelerate from 0-62mph in 6.5 seconds.

The entry-level engine and the likely volume seller is a 3.0 V6 TDI engine generating 238bhp and 405 lbs ft of torque while returning 38.1 mpg and emitting 195 g/km of CO2 to place it in VED band J.

Four versions will be available in the UK: SE, Altitude, Hybrid and Escape. The Escape model, available with the V6 TDI engine, features 4XMOTION which comprises reduction gearing, centre and rear differentials that can each be fully locked for off-road applications and five stage control for the four wheel drive system.