An iPad application has been developed for Lexus.

A goal is to use it to collect people's data at events attended by Lexus.

Amaze has produced the app that lets users either request a brochure for a particular Lexus model or book a test drive through their local dealer.

The  application uses the iPad’s 3G wireless mobile phone network to send the data to Lexus and Amaze, where it is distributed to the relevant dealer to be processed.

Users can also watch video demonstrations of the technology available in the cars. 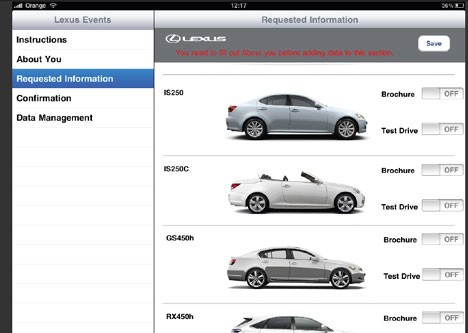 Melanie Evans, manager, Lexus advertising and centre marketing, said: “We trialed the application at an event recently and it was a huge success.

"People loved picking up the iPad and being able to watch the sort of content that traditionally they’d have had to watch from a laptop or desktop computer.

"It’s also streamlined the process of collecting and redistributing data so we’re excited about rolling the application out across all of our UK events.”