AM Executive Breakfast Club: Black Farmer has a passion for business 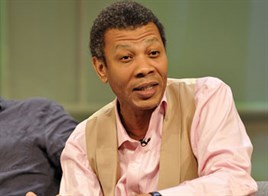 Talented marketer, self-confessed business “thug”, the Black Farmer Wilfred Emmanuel-Jones told delegates at AM’s latest Executive Breakfast Club that it was his untiring focus to follow his dreams that led him to succeed in his lifelong ambition to have his own farm.

Born in Clarendon, Jamaica, Emmanuel-Jones was surrounded by people working the land, which formed the basis for his passion for farming and the outdoors.

His family moved to the UK in the 50s, a move Emmanuel-Jones describes as entrepreneurial in itself, and settled in Small Heath, a run-down suburb of Birmingham.

The oldest of nine children, he said: “My dad owned an allotment and as the oldest son, it was my job to look after it.

"I was 11 and I made a promise to myself that I would have my own farm one day and everything I did would be towards me achieving that goal.”

Emmanuel-Jones was a difficult student. He’s dyslexic and proved to be unruly in the classroom and this attitude followed him when he left school with no qualifications at 16 to join the Army.

After a year of “rubbing up” superiors the wrong way and being a “mouthy git”, Emmanuel-Jones was given a dishonourable discharge.

He said: “I was told I would end up in prison and my life was going in the direction many had predicted.

“There was only one avenue left open to me at that time – catering.”

He trained as a chef at a time when the profession wasn’t so glamorous and found that it was something he loved.

However, with his dream still nagging him, he enrolled in a training scheme to become a television producer.

He said: “People said I was crazy to try, but I will always remember two things my father taught me – always be ruthlessly focused and have a positive attitude.

“You can do anything if you stick to those two rules and I’ve always been lucky enough to have people go out of their way to help me.”

He took a copy of the Radio Times and wrote to 250 television programmes asking for experience. None wrote back.

He called them all and no one would take his calls. It took 18 months of persistence before he managed to meet with the BBC.

He said: “I was told I didn’t have the right attitude or education, but for some reason they had the courage to employ me as a runner on a three- month contract.”

That was the foot in the door Emmanuel-Jones needed. He stayed at the BBC, becoming a researcher and then producer for more than 10 years, working for Peter Bazalgette on the Food and Drink series.

He said: “Chefs are the sort of people that will take you outside to sort the problem out and they quickly found out I’m the sort of person who will oblige.”