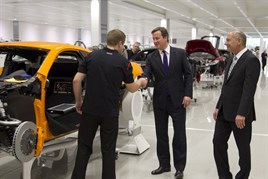 The new site will produce 1,000 units of McLaren’s MP4-12C supercar a year with hopes to eventually increase production to 4,000 units.

McLaren has three dealer group partners in the UK with sites run by Jardine Motors, Sytner Group and Rybrook Holdings in London, Manchester and Birmingham respectively.

The Prime Minister said: “I want the country to be respected for what we make, as well as the services we provide. McLaren, in breaking new ground, are a powerful rebuke to those who say the manufacturing base has gone.

"F1 is an incredible British success story, but they are just the high end of what is being achieved.
"These are tough times for Europe and the UK, but we have to be alive to the hope out there. Visits to places like this make me optimistic that we can in time ride out this storm and come out stronger."

Dennis said: “Design and manufacturing have been at the backbone of British industry for more than 100 years, and are activities that we as a company not only passionately believe in, but consider of primary importance to the future economic growth and recovery of the United Kingdom.

“But, in the UK, there has been an over-reliance in the past on the financial and service sectors. Now, industry is realising that Britain’s grand manufacturing tradition is a solid platform upon which to build – and I want the McLaren Group to play its part in the crucial recalibration of UK plc.”