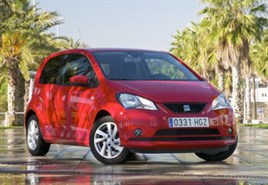 Seat's new Mii, it's version of the Volkswagen Up, is expected to attract a new generation of buyers to the brand when it goes on sale next summer.

Prices for the Mii will start at around £7,500, well below the sector average price of £9,100, explained UK product and planning manager Andy Medcraft.

Competitors for the Mii are the Peugeot 107, Toyota Aygo and Kia Picanto/Hyundai i10 rather than its VW and Skoda siblings, he said, adding that there is very little cross over of buyers between Seat, VW and Skoda.

Apart from price, the Mii will be differentiated by its equipment levels which are planned to be more generous than those of the VW Up and the Skoda Citigo, although final negotiations are ongoing.

Those should be completed by the end of the year and customers will be able to order their Mii from the New Year.

Seat has one of the youngest buyer profiles in the industry at around 40 according to independent industry figures, said Medcraft and Mii is expected to maintain that trend.

"We're expecting about 60 to 65% of buyers to be women which is the reverse of where we are at the moment with the rest of the range so it's a great opportunity to extend the brand further."

One feature that Medcraft expects to be particularly attractive to younger buyers is the portable sat-nav and infotainment system which incorporates a hands-free phone system and onboard computer.

All Miis will be prewired to accept it so it can be bought later. "It would make an ideal gift," said Medcraft. It is expected to cost around £300.