Buying trends: It's tough in the middle

The market share of big cars grows and that of small cars shrinks.

Not exactly the summary you would expect during an economic downturn, but it is a pattern seen throughout the economy: estate agents are reporting that prime London property is now back to 2007 prices, while the sort of houses most of us live in are continuing to drop in value.

Meanwhile, at the time the new car sales figures for 2010 were ann-ounced, bankers’ bonuses were dominating the news.

Thus it is no surprise that of the five companies that boasted the largest percentage growth in sales, four were premium brands (Rolls-Royce, Bentley, Porsche and Land Rover).

The sole exception was Renault, which did not so much grow as recover from its near-resignation in 2009.

In terms of the big volume players, Ford had a more difficult year in 2010 after many consecutive years of strong progress.

Ford had benefited greatly from the industry-wide production cuts of early 2009 – with little competitive discounting, Ford could sell its high-quality but high priced cars on their merits. In 2010, with far more discounting going on and an ageing Focus, Ford found the going tougher – especially as the pound failed to strengthen as expected.

Vauxhall recovered some ground in 2010, which was only to be expected after its on-again off-again sale in 2009.

The word from Luton is that they are very relieved to have stayed within GM, but apparently many at Opel HQ are still inexplicably upset they were not sold to an Austrian/Russian consortium.

However, there is still plenty of work to do on the image of what many retail buyers consider to be a dull fleet brand.

Vauxhall is pretty well at the peak of its model cycle with the new Astra and new-ish Insignia, so there is not much more to come from the model range in 2011.

Given the overall trends in the economy, it is no surprise that the big three German premium brands had a good year.

All increased market share, with BMW becoming the fourth biggest car company in the UK, while Audi is up to sixth.

It does rather raise the question of what exactly premium means – it is clearly not a synonym for exclusive.

At the same time, a number of value brands had good years: Hyundai, Kia and Skoda all increased sales by between 9% and 11%.

Thus the message seems to be that this recession is particularly tough for brands in the middle: the rich carry on regardless and the squeezed majority look for value.

It does not spell a crisis for mid-market brands per se, but it does mean that they have to provide a particularly compelling offer. 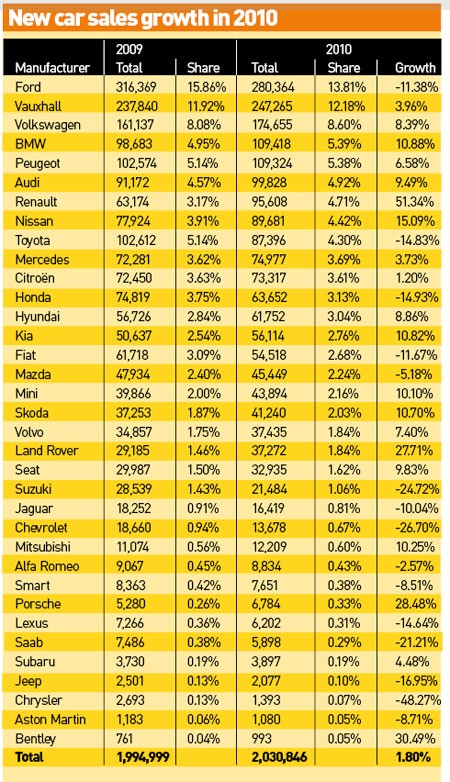