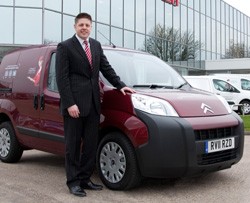 Michael replaces Robert Handyside who has been promoted within Citroën to the Paris-based position of B2B development manager.

He will report in to Martin Hamill, Citroen UK head of commercial vehicles and business sector.

Reporting to Michael, Chris Jones has been appointed to the position of commercial vehicle sales manager. Jones takes up his new position after four years within fleet services.