The all-new Ford Ranger pick-up enters the stage on the Ford stand at the Commercial Vehicle Show in Birmingham ahead of its European sales launch later in 2011. 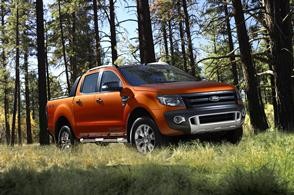 The all-new Ranger is the first commercial vehicle to be built under the One Ford strategy as part of a global product programme, bringing together the full engineering expertise of Ford around the world.

Developed in Australia, it will be produced in Thailand, South Africa and Argentina for sale in more than 180 markets worldwide.

New Ranger will be offered as a complete family of pick-up models with a choice of single cab, RAP (rear access panel) cab and double cab – along with the option of 4x2 and 4x4 drivetrains, two ride heights and up to five series choices.

A larger load box offers increased carrying volume with all cab styles; generous towing capacity ranges up to a best-in-class 3350kg; and models with the 2.2-litre diesel have a payload capacity of up to 1333kg.