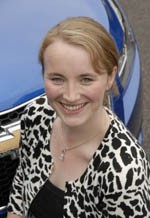 Lawman has been working for Chevrolet since 2005. She started her career in marketing roles with the Reg Vardy dealer group and a Mercedes-Benz retailer, before joining Chevrolet at the time of the brand’s inception in the UK.

Her previous roles within Chevrolet have included a field-based regional role, heading up dealer marketing and her most recent role as product manager, while Rebecca was also the driving force behind Chevrolet’s recent appearance at the Goodwood Festival of Speed.

She will be responsible for all Chevrolet’s ongoing marketing activity, including the brand’s recently announced ‘Make it Happen’ media campaign, an initiative that aims to give the American car brand much greater recognition and awareness in the European market.

Lawman takes on the new role as Chevrolet prepares to launch its new Aveo supermini, which arrives in UK showrooms in October. She will also oversee the launch of the extended range electric car, the Volt, which makes its UK debut early in 2012.