UK to take on the world in three automotive skill sectors

Three young men from across the automotive industry in the UK have been chosen to take part in the UK at WorldSkills London 2011. 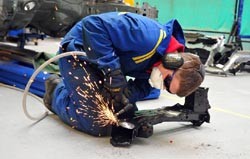 They were selected after taking part in a tough four day selection competition earlier this month.

Now representing the UK for the automotive skill categories are:

WorldSkills London 2011, which takes place at ExCeL from October 5-8, will be the world’s largest international skills competition.

At the competition, 1,000 competitors from over 50 countries will compete in 46 skill areas over four days.

The event will also offer visitors impartial advice and guidance on careers and apprenticeships. At WorldSkills London 2011, the UK will compete in 37 skills ranging from Mobile Robotics, Electrical Installations and Graphic Design to Cooking, Hairdressing and Landscape Gardening.

Skills Minister John Hayes said: "Those representing the UK at WorldSkills will play a hugely important role in bringing the value of vocational skills and practical learning to national attention.

“To support the ambitions of young people everywhere in our country, we have created a record number of apprenticeships, and we are building the best skills training system we’ve ever had."