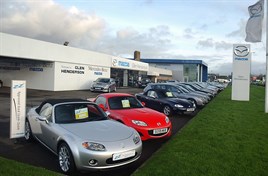 Border Cars has acquired Glen Henderson Mazda in Ayr for an undisclosed sum.

The business was sold following the retirement of owner Glen Henderson.

Border believe the acquisition will help to provide long-term stability since it provides the group with a large market area covering south-west Scotland and north-west England. Border Cars, founded in 1977 by Mike Fusco, already has Mazda dealerships in Dumfries and Carlisle and last year added a third Mazda site in Workington following a £3 million investment. The company has an annual turnover of £75 million and it employs 234 staff.

Gordon Burt, Mazda UK’s business manager for Scotland, said: "When Glen Henderson made the decision to retire and sell the business, he chose a strong family business with the same customer service ethics as his own."

The team at the dealership will be transferring to new owners Border Cars under the leadership of dealer principal Calum Watson and Fusco.