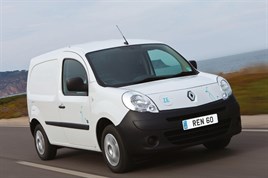 The Government has extended its Plug-In Car Grant until 2015 and has created a new Plug-In Van Grant reducing the cost of eligible vans by 20% up to the value of £8,000.

Each van qualifying for the grant must emit less than 75g/km CO2, be capable of at least 60 miles between charges (10 miles in electric mode for hybrid vans), more than 50mph and to ensure safety and be approved by ‘European Vehicle Type Approval’.

Norman Baker, Parliamentary Under Secretary of State for Transport, said: "Business minister Mark Prisk and I have reviewed the existing Plug-In Car Grant, which provides a discount of 25%, up to £5,000 off the price of eligible ultra-low emission cars.

“We examined the need for and value of the grant, as well as its scope. We have concluded that there remains a strong case for the grant. We have therefore decided to continue with the Plug-In Car Grant at the current level, with provision out to 2015.”

He said: "An upfront purchase grant, when combined with lower running costs and tax benefits, can make switching to an ultra-low carbon van an attractive choice for businesses. The technology also fits well with a large portion of the van market that relies on short urban trips to and from base."

The Society of Motor Manufacturers and Traders welcomed the news of the grant’s renewal and the addition of a van grant.

Paul Everitt, SMMT chief executive, said: “The Plug-In Car Grant and the new Plug-In Van Grant send a strong signal to the global automotive industry about the UK’s determination to be a leading market for ultra-low carbon vehicles.

Extending funding to the commercial vehicle world will be welcome news to the manufacturers of low carbon vans like Renault, Ford and Mercedes-Benz, as well as those businesses looking to cut operating costs.

Andy Heiron, head of electric vehicle programme, Renault UK, said: "This addresses the big question that many customers and industry commentators have been asking us for many months and I think we can expect to see a surge in demand.

"Allied to the environmental and corporate social responsibility benefits of running an EV, a fully electric van for less than £13,600 with significantly lower running costs than a diesel, is a very compelling financial argument in favour of Kangoo Van Z.E."