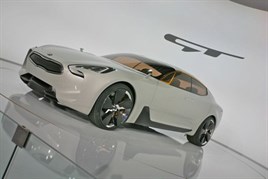 The UK operation has already mentioned many times that after it has sorted its core range, which will be completed with the new Carens in spring next year, the brand attention will turn to a halo sports product.

Former Kia UK managing director Michael Cole, who has now moved to Europe to head up Kia’s European operations, told AM recently that design boss Peter Schreyer was still “obsessed” with creating a sports car for the brand.

A 200bhp Procee’d will come first in June 2013 but the company is now “seriously looking” at the idea of building a car based on the GT coupé concept from last year's Frankfurt show.

Lee said: “In my opinion a sports car should be RWD. When I was at Hyundai we tried the Coupé with front-wheel drive. It was considered sporty looking, but the driveability was different.

"We haven't decided yet, but we need a certain product to help with our brand image. We have tried a couple of concept cars and found some potential in the GT. We will try a couple more in the future, starting at Geneva next year, and test the media and consumer response before choosing one."