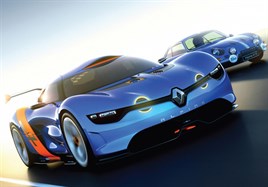 Renault will be resurrecting its Alpine badge with a new sports car co-developed with Caterham.

Both Renault and Caterham will bring their own version of the first car from the collaboration to market within three to four years.

Renault has already shown off its Alpine A110-50 concept car (pictured) which will influence the style of the new model. The cars will be jointly engineered, but built exclusively at the Alpine plant in Dieppe, France.

Industry experts are predicting the new model to go up against the Alfa Romeo 4C compact supercar with prices likely to be around £35,000-£45,000.

Ghosn said: “This innovative partnership with Caterham embodies a longstanding ambition: the creation of a sports car with the Alpine DNA. It carries both opportunities for the Dieppe plant and the development of its historic know-how.”

Tony Fernandes, Caterham Group chairman, said: “I have not felt as excited about a new venture since I launched AirAsia in 2001 and I want to thank Carlos Ghosn and Carlos Tavares and everyone in our new Renault family for having the belief in Caterham Group to create this partnership.

“Many people doubted us 11 years ago when we launched our airline and I am sure that there will be doubters again this time, but we will not fail your trust.

"We know the markets we are going into and, particularly in my playground in Asia, there is a huge opportunity to replicate the AirAsia model and give consumers access to exciting, affordable products that marry our interests in F1 and technology and help make their dreams come true.”

The new Alpine product will mean Renault's model range will be a split focus across four segments of the market. Dealers in the UK will have access to budget cars from Dacia, all electric vehicles like the Zoe, Renault's volume products like the Clio and Megane and now a top of the range sports car with the Alpine.

It's likely dealers in the UK will be able to bolt on the Alpine brand to their dealership as a specialism.