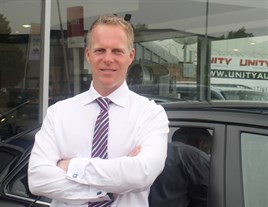 With a recent acquisition taking Unity Automotive to three sites in Tredington, Warwickshire, Balsall Common, near Coventry, and Peterborough, making it one of the largest Subaru specialists in the UK, there’s no mistaking Mathers’ passion and ambition to succeed.

That fire for cars has existed since helping out at his father’s Ford business doing minor services at just 11 years old.

He was told the best route to getting a full time job at a dealership was through the parts department so that’s where he started. He was running the department at 18.

He told AM: “I was selling cars from the parts department and I became sales director at 25 after moving into the sales department for a few years.”

It was at this point Mathers was having to juggle his sporting career racing jet skis with his responsibilities in the showroom.

Mathers said: “My boss at the time said to me: ‘One of us is going to retire and I hope it’s me.’

“I would be away racing in America or Portugal and it was his way of politely saying it was my time to focus.

“So from that point onwards I started working on a future plan to buy Crossroads garage out.”

Mathers became part of Crossroads’ exit strategy and in 2003, along with two business partners, successfully completed a management buy out of the business.

International Motors, the Subaru and Isuzu importers, recognised Mathers’ potential and passion for the brands and supported him with his ambition to run the business.

He said: “They’ve always been incredibly supportive of me.

IM has sent me away on countless residential courses to become a dealer principal and it has invested a lot of time and effort
in me.

“When we went to the stocking companies asking for £800,000 IM supported us and told the bank we were a good bet.
“While IM has had other groups and other dealerships coming in and out of the fold, we’ve stayed constant. We’re at the front of the Subaru world, everybody knows within that very tight community that we’re passionate brand specialists when it comes to that product.

“So from 2003 to 2008, whenever a special edition of the Imprezas was launched we were their biggest seller. And if you look at the who’s who of the top sellers of the original Terzos, the RB5, WR1, RB320, it’s us.”

Performing an MBO was difficult enough, but it wasn’t until Mathers took on his second site that things really started to
get challenging.

The burning ambition to expand led to the business taking on a failing Subaru and Isuzu site in Peterborough. The business was a month away from closure, losing close to £30,000 a month and the latest accounts showed the business was running at an annual loss of £294,000.

Mathers admits the full picture of just how much trouble the business was in wasn’t revealed immediately.

He said: “Some of the information seemed obvious and some of it we uncovered later, which is the normal way in a buyout.

“We knew from the first conversations we had when we were doing the takeover, talking to the staff, that there was a big problem here.”

Mather said: “We had some fairly fast pedalling to do with demoralised staff because they all quite rightly thought ‘any minute now we’re going to be looking for a new job’.

“So we had the three biggest issues you could possibly have. We’d got demoralised staff, no customer database and no DMS.”

Within a week, Mathers installed processes and systems from the Tredington site to breathe life back into the business.

Mathers has now increased revenue across the group by 40%. It has the highest customer satisfaction scores for Subaru UK with a net promoter score 20 points ahead of the national average of 54%.

Training was a major aspect of how Mathers saved the Peterborough dealership, with its AM Award winning training programme “Discover and Develop”.

Each member of staff underwent psychometric testing and evaluated to see if their personalities matched the positions they were already in.

Mathers said: “You might have a star performer technician potentially who would be much better in parts because that’s the way his preference flow would be, the way he takes information in, the way he can relay it.

“So we basically rejigged the staff roles to make sure that we housed the right people in the right places.

“The wrong person in the wrong role will never excel and they probably won’t enjoy coming to work and everything about the job becomes a problem.”

Mathers knew the process worked because of using it at the Tredington site for four years, but there were still ego problems that were encountered during the changes.

He said: “You have to get them to forget about the titles or how they’re perceived, and to try working in a different environment and in a different role.

“I’ve changed a service manager to a parts manager, which was a radical step for him as well.

Clearly, some people are not going to enjoy a change like that and the business did lose some employees. The previous staff were used to working without processes and as soon as they were put in place their ability to do whatever they wanted meant they just left of their own accord rather than having to be “pushed”.

Mathers said: “They were given the options and they were given coaching and mentoring, but literally it was too big a leap for three of them.”