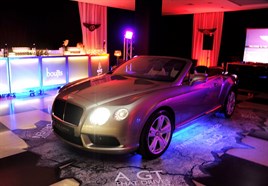 The Mayfair showroom of luxury car dealer HR Owen was transformed into a pop up nightclub in association with Boujis, the exclusive private members club in London, to celebrate the European launch of the new Bentley Continental GT V8.

Signature cocktails were showcased by the Boujis brand, including a bespoke ‘BB’ cocktail.

The showroom was transformed to resemble a cocktail lounge with the windows of the showroom blacked out.

Boujis resident DJ ‘Klaus’ was on hand mixing tracks to the acoustic sounds of the new V8 engine.

The business has also completed the move of its Jack Barclay service facility from Vauxhall to a new facility at Burr Road, Wandsworth, south west London.

Director Guy Ritchie and Blur bassist Alex James were among some of the celebrities that attended the event.

HR Owen has also been marketing itself to the fashion world after loaning out a selection of supercars to the Stylist Magazine editorial team to get them around the city during London Fashion Week.

View a gallery of some of the cars and journalists