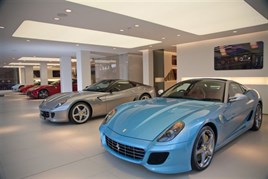 It came during a year when HR Owen took over the Bentley and Aston Martin businesses of Broughtons and invested in a Ferrari outlet at London's Berkeley hotel.

The AM100 group's chief executive, Joe Doyle, said the group enjoyed a strong performance in new car sales in 2011.

"Once again we outperformed the market in this key area and hope to build on
this in 2012, assisted by the contribution from the newly acquired
Broughtons' businesses, which will be rebranded in the near future.

"We are confident that our investments in support of the group's strategy 'Experience
is Everything' will deliver strong growth in the years ahead."

However the success in new car sales, partly through converting used car customers, had meant a fall in the group's used car volumes.

Trading in the first ten weeks of 2012 has started strongly, particularly for
new cars, and is ahead of both internal expectations and the prior year, Walden said.

He added: "We plan to generate profitable growth in our existing businesses, and have the resources to develop new opportunities as they arise."