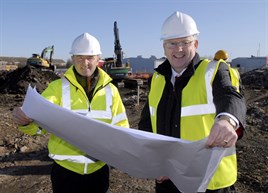 The proposed Ford retail outlet on Newcastle Road will create at least 45 jobs in the region and is due for completion by January 2013.

Benfield already has five Ford dealerships throughout Yorkshire and the group has also recently added four Audi sites to its growing portfolio of dealerships with the purchase of North East Audi.

Mark Squires, Benfield Motor Group chief executive, said: “The proposed state-of- the-art showroom is due to be fully operational by January 2013 and we already have a temporary showroom and service centre in place.

“Moving into Sunderland with Ford is a natural geographic fit for Benfield and we are very much looking forward to building and developing the Benfield brand and reputation in Wearside.”

The proposed £5 million development will include a 14 car showroom, a full aftersales service and service and repair centre.

Staff at the present Jennings Ford site on Riverside Road have transferred over to Benfield with a temporary showroom operated by Benfield in place at Newcastle Road on May 1, 2012.

Benfield was founded in Newcastle in 1957 by John Squires Senior and developed by John Squires Junior, the present chairman and donates 5% of group profits to worthy causes through the Benfield Charitable Trust.