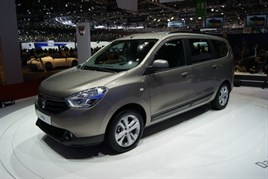 The Romanian Dacia brand will return to the UK early next year and is trialling a combination of dealer and internet sales.

Rafael Treguer, director Dacia brand development said that UK dealers have already seen the UK-bound cars and the reaction so far has been positive.

Dacias will be sold through the current Renault UK network and possibly via the internet - a scheme currently being tried out in Italy and the Netherlands.

However the cars will be sold for no-haggle showroom price and that applies to fleet as well as retail buyers. Treguer added: "It is a strategy that has worked for us in all other markets. It doesn't matter if you buy one, ten or one hundred, the price you see is what you pay.

"It's a different way of selling cars but selling through the internet does not mean a disconnect with dealers. Customers still have to go into the dealership to sign the forms and collect the car which gives salesmen the opportunity to sell accessories, finance or extended warranties."

Prices have yet to be announced for the UK but Dacia cars were originally conceived as costing less than £7,000.

Treguer said: "We keep the costs down because of the simplicity of the cars. We have three engines and two trims. There are no sunroofs or high equipment levels. All the parts we use have already been amortised through the Renault Nissan Group and effectively cost us nothing."

The Duster will be the first of the Dacias to arrive early next year along with the Sandero five-door hatchback. The right hand drive models will be made at the Renault Nissan Alliance plant in Chennai, India. Dealers may get some left hand drive Dusters later this year to put in showrooms to attract orders.

It has not yet been decided whether to add the Lodgy MPV to the UK line-up because it is currently only made in left hand drive form.