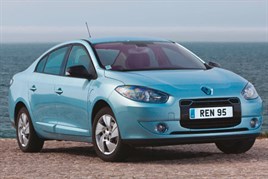 Renault has launched its new Fluence Z.E electric vehicle saloon to dealers that will be selling the car at an event in the north east.

Benfield Renault in Newcastle has also been confirmed as the dealer that will be stocking the Fluence ZE in the north east. The dealership is already selling the new Kangoo Van Z.E, from the site.

Dealer representatives from dealerships in Scotland, Northern Ireland and northern England got the chance to test-drive the electric saloon at the Gateshead College Performance Test Track in Washington.

Andy Heiron, Renault’s head of electric vehicles for the UK, said the Washington based Performance Track was selected to showcase the new Fluence Z.E due to the EV infrastructure already in place in the North East.

Heiron said: “We recognise North East England as one of the foremost connected EV networks in the UK.

“Many of the dealerships who will be invited to attend will be travelling from areas outside the North East with little EV charging at the moment, so a visit to this EV-ready region will help give them additional confidence that electric vehicles are the transport of the future.

“Our unique model of battery hire helps to offer an overall cost level which is competitive with diesel and which we think will make electric vehicles a real, viable alternative for both businesses and individuals.”

Josey Wardle project manager for Charge your Car, the North East’s Plugged in Places scheme, said: “With well over 300 EV charging posts now in place throughout the region, we’re well placed to support the growing number of EV drivers taking to the road in the coming months and years.”