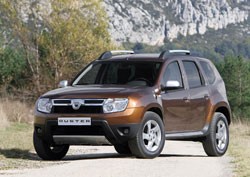 Renault is launching the Dacia Duster in the UK with a minimum pre-order deposit of £100 from June 28 on the brand’s website.

The deposit will secure priority delivery of the new Duster SUV which will be priced from £9,995 with 4x4 versions available from less than £12,500.

Dacia said online interest has been an early indication of the brand’s “likely success” in the UK.
Customers will be invited to ‘build’ their desired Duster via an online configurator before selecting a supplying Dacia dealer to fulfil their order.

Manufacturers’ recommended retail prices will also be guaranteed over the pre-ordering phase, to December 2012. Deliveries will begin from January 2013 onwards.

Dacia is a low cost business model for dealers, with minimal investment being branding and a corner of the Renault showroom, while it is pitched as a no-haggle bargain-priced proposition.

Bought by Renault in 1999, Dacia re-emerged in 2004 with the unveiling of the four-door Logan saloon, which tapped into the potential of emerging markets, including Central Europe, with a price of 5,000 euros in some countries.

In Western Europe, thanks to a growing model line-up, low prices and growing reputation, Dacia last year claimed top spot in Romania and Morocco and became France’s fourth best-selling brand in 2010, with Duster becoming the best-selling 4x4 in the country.