Renault launches Twizy in the UK 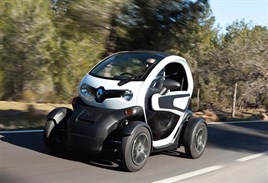 Renault has started sales of its Twizy quadricycle which is priced from £6,690 and £45 a month battery hire based on 4,500 per miles per year/three year contract.

The Twizy will be sold through a network of 22 Renault electric vehicle specialists and the entire UK network will have demo and display vehicles from April 20.

Today also sees the start of the UK marketing campaign for Twizy featuring top DJ David Guetta and his wife Cathy, as part of their global ambassador partnership with Renault.

The new online and TV ad campaign entitled ‘Plug Into The Positive Energy’, set in a fictional futuristic club, ‘Party Station’, where the dancefloor generates the electricity to charge the Twizys parked underneath, includes David’s new song ‘Alphabeat’.

Renault has set up a campaign that will run in slots with Channel 4’s Hollyoaks, Britain’s Got Talent on ITV and a 24-hour homepage takeover of MSN UK. The advert will also be promoted through Facebook and YouTube.

The zero emission two-seater compact is charged using a standard three-pin plug. Full charge takes three and a half hours giving a range of around 60 miles.

The Twizy is powered by a 17bhp motor with a limited top speed of 50 mph.

The lower powered version, Twizy 45 (5hp), 45 kph/28 mph), was not originally planned for the UK market, however, recent confirmation that a new category of European licence – AM – for 16 year olds and over, comes into effect in the UK from January 19, 2013, means that Renault UK are now studying its sales potential.

Options include scissor doors (£545), driver and passenger blanket £110 and a 50-litre leisure bag £95 which sits on the rear seat and clips into the chassis to keep luggage in place. Metallic paint is available for £195, a child booster seat at £55, and alloy wheels for £340.