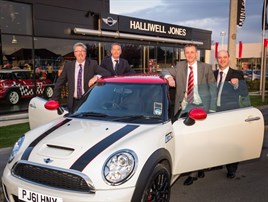 Halliwell Jones Group is looking to expand following success in securing £7.6 million from The Co-operative Bank.

The group, which has five car dealerships in the North West of England and Wales, is using the loan from the Manchester corporate banking centre of The Co-operative Bank towards ambitious £9.2m plans to expand and improve its dealerships in Chester, Warrington and Southport.

This month marked the opening of the Halliwell Jones’ newest Mini dealership at its BMW site in Southport, and work is already underway to double the size of its BMW Mini dealership in Warrington, with an improved layout and additional customer parking.

A £5.5m portion of the loan is being used to aid the development of a new service centre and bodyshop at the group’s BMW dealership in Chester.

The financial injection is also expected to increase jobs at the Southport, Warrington and Chester dealerships by about 10% over the next three years.

Halliwell Jones Group is an independent car retailer with dealerships located in Southport and The Wirral in Merseyside, Chester and Warrington in Cheshire, and Llandudno in Wales.

The company has banked with The Co-operative Bank since 2004 and acquired funding in 2007 to acquire its BMW dealership in Llandudno.
The expansion is part of the Group’s ongoing expansion and growth strategy plans.

Halliwell Jones Group finance director Glyn Howes, said: “The continued success of the group relies not only on our excellent relationship with BMW/Mini and our highly talented staff who work hard to provide the very best customer experience, but also on the funding support of our bank, for which we are extremely grateful.

“This is an exciting time for the group, with the expansion at Chester, Warrington and Southport, representing our commitment to further enhancing our portfolio, creating more jobs and working to further increase customer satisfaction – above and beyond the excellent standard we already achieve.”

Work on the group’s Warrington and Chester dealerships is already underway with completion for both expected before the end of the year.

Steve Lomax, senior corporate manager at the Manchester Corporate Banking Centre of The Co-operative Bank, said: “Since opening its first dealership in Southport more than 25 years ago, Halliwell Jones Group has grown significantly. Initial first year turnover of £20m increased to a turnover last year in excess of £186m, with staff levels at inception of 20 now at 330.”

AM Poll
How has the COVID-19 pandemic affected your attitude or mental health? Please leave a comment
Vote
View all
1050