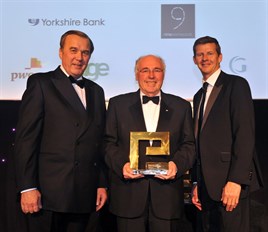 Benfield Motor Group’s chairman John Squires OBE (pictured centre) has been awarded with a Lifetime Achievement Award for his outstanding achievements in the motor industry and contributions to charity and worthy causes.

Awarded by the Entrepreneurs’ Forum he was presented with his award by Sir Peter Vardy and Olympic Athlete Steve Cram (pictured left and right) at the ‘Who Dares Wins’ Conference in Newcastle.

Squires said: “It’s overwhelming. There is something very humbling about getting recognition from your peers, and I feel very humbled.”

Paying tribute to his wife, his son Mark and Nigel McMinn, he added: “A wise man once said “no man is an island entire of itself” and that’s particularly true in my case. I have been very, very fortunate to have some great people around me.”

The company was established in 1957 and works with 12 franchises at more than 30 dealerships in the North East, Yorkshire, Cumbria and South West Scotland.

Benfield supports a number of community projects and charities including the Prince’s Trust, with 5% of annual gross profits going into the Benfield Charitable Trust for worthy causes.

Benfield managing director Nigel McMinn said: “John is a decent, honest man with huge integrity. The thing that impresses me most is that it’s not about him. He puts a huge amount back. He is one of life’s givers.”

John Wall, chairman of the Prince’s Trust, described him as “a committed and driven entrepreneur” of outstanding achievements whose company had made a huge contribution towards helping disadvantaged young people in the region.

Anthony Sargent, general director of The Sage Gateshead, of which John was vice-chairman, said: “He has been the most fantastically generous, supportive friend to my company. He was admired and loved by everyone working here for his integrity, his courage, his eye for an opportunity and his legendary generosity of spirit.”