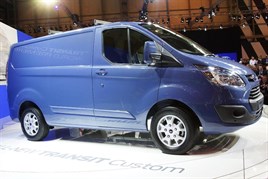 Ford is addressing the skills gap in its commercial vehicle network with one-on-one skill needs assessments as many of its experienced sales executives approach retirement age.

Steve Clary, Ford CV director, has also responded to concerns that dealers will lose out on valuable servicing work with the new Transit, which has set service intervals at two years/30,000 miles.

He said: “Most of my experienced sales people in the network are looking at retirement age so we’re facing 350 one-on-one skills assessments which will work out the training needs of dealerships where we will lose senior employees.

“We’re acting now so we’re not in a position three years down the line where we’re left without experience commercial vehicle sales people.”

Ford is lowering the cost of its dealer training by making more of it available online. Clary believes an increase in e-learning will reduce the cost and time out of the business.

Training will also focus on improving finance training to give customers and businesses struggling to get credit access to funding.

Clary also said Ford has an initiative in mind that has been discussed with dealers that will counter the potential lost service hours as a result of the Transit’s extended servicing interval.

Clary said: “We understand how longer service intervals will affect dealer service departments but we’re working on something innovative which will be available at launch.”

Clary confirmed there would not be a “dismantling or massive shake-up” of the Ford CV network which is made up of 104 specialist CV dealers and 100 Transit specialists.

He said: “I’m very happy with the dealers that we have in place. They’re doing a great job.”

Clary said it was difficult to pull out an average profitability figure, but the share of total profitability within the network was “coming up”.

Ford launched the new Transit at the Commercial Vehicle Show in Birmingham and while the model already has an “extensive customer base”, the brand is hoping it will broaden the appeal in the market.

Clary said: “We want to attract new customers to the range. The current Transit is great at what it does, but it’s very utilitarian. We want to attract more owner operators, guys that need to use their work vehicles as a car for their families too.”