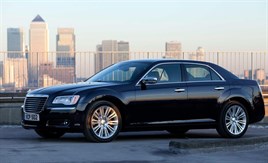 Chrysler has said the price jump for its new 300C to £35,995 compared to the previous generation which was under £30,000 is justified because of the amount of standard equipment.

Chrysler's UK brand director Nigel Land said: “It is still less expensive than anything else in the executive segment if you compare like for like on equipment levels.

“The 300C is well equipped, whether in Limited or even more luxurious Executive trim. Unlike the majority of its rivals the equipment comes as standard."

To view all of the new pictures of the 300C head to AM's gallery section.

The top of the range 300C is priced at £39,995. There will be two engine options available – a 3.0-litre V6 turbo diesel which includes the Fiat Group’s MultiJet 2 technology and a 3.6-litre Pentastar petrol. However, Land does not believe there will be significant demand for the large petrol engine in what is a diesel dominated segment.

The driver's side door mirror darkens automatically to reduce dazzle and both side mirrors lower when reverse gear is engaged to give the driver better visibility of the ground, kerbs or other obstacles.

A full length dual pane panoramic sun roof is standard on the Executive trim and the traditional fuel cap is a thing of the past. Instead the fuel flap opens at the push of a button, a fuel filler pipe opens when the pump nozzle is inserted and closes automatically when refuelling has been completed, helping to protect against theft and vandalism as well as fuel spills and incorrect fuelling.

There are no plans either for an estate version of the 300C.