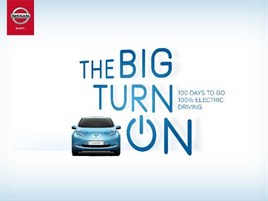 Nissan has reached its social media target to reach one million potential customers and advocates of its electric Leaf with its Big Turn On campaign.

The campaign encouraged drivers across the UK, France, Germany and the Netherlands to share details about the Leaf on their own social networks and through the Big Turn on website.

At the end of the campaign, the city with the most drivers turned on to electric vehicles will be given 30 Nissan quick chargers, while the individual who encourages the most people to turn on will win a Nissan Leaf.

The CHAdeMO standard quick chargers are among 400 that Nissan plans to donate to cities across Europe by the end of 2012 to speed up infrastructure development.

The batteries in the Leaf, and other compliant vehicles, can be "refuelled" by these chargers to 80% capacity in 30 minutes, although consistent quick charging will impact on the overall life of the battery.

Despite reaching the target, Nissan will continue with its social media campaign to promote electric vehicles at the Big Turn On website