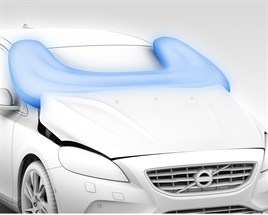 The new Volvo V40 has become the highest scoring model in its segment in the latest EuroNCAP safety tests. It is one of five models scoring the maximum five stars in the latest results.

In EuroNCAP’s tests, this has translated into a 88% score in pedestrian protection, the highest score achieved in this part of the assessment.

Joining the Volvo V40 with five stars are the Audi A3, Ford B-Max, Kia Ceed and Renault Clio. The new Isuzu D-Max was also tested in the latest assessment, achieving four stars – a significant improvement on the struck through two-star rating scored by the previous model when tested in 2008.

The D-Max now scores 83% for adult occupant protection and improved protection for child occupants against a tougher 2012 regime. Equally, pedestrian safety score is considerably improved although - with 51% - it did not reach the 60% threshold required for five stars.

Despite doing away with the B-Pillars, the Ford B-Max still scored five stars. To ensure the highest levels of protection in lateral collisions, Ford has incorporated a structure into the doors to form a central post when the doors are shut.

EuroNCAP found that safety was uncompromised as the B-Max scored 92% for adult occupant protection. The mini MPV also comes with Active City Safety, an AEB system previously rewarded under EuroNCAP Advanced, which helps the driver achieve maximum braking effectiveness in an emergency situation.

The list of five star achievers is closed with the latest releases of Renault Clio, Kia Ceed and Audi A3. Compared to their respective predecessors, these hatchbacks offer significantly improved pedestrian protection amongst other notable improvements.

Michiel van Ratingen, EuroNCAP secretary general, said: “In Europe, 14% of all road traffic fatalities are pedestrians. While in the last three years EuroNCAP has increased the requirements, the vehicle manufacturers have stepped up to the challenge. The scores observed today were unthinkable just a few years ago with the new V40 setting a new standard.”